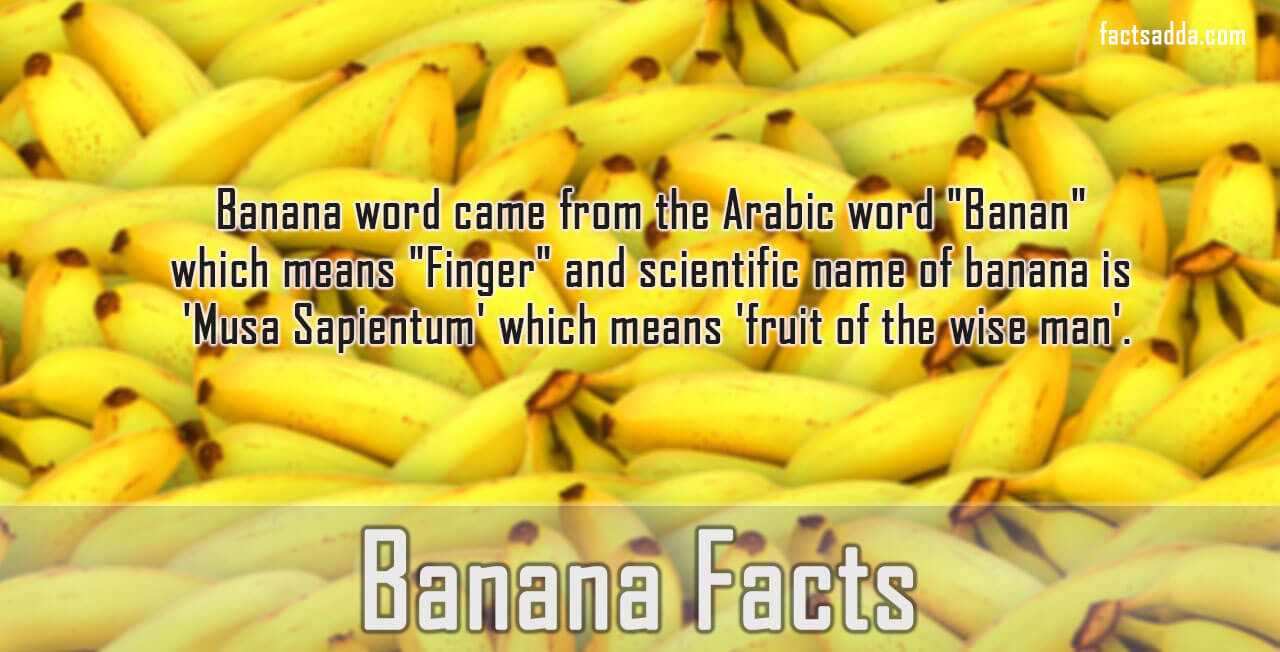 Banana, the fruit that is loved by everyone. It is not only delicious but full of nutrition. In India’s most of part it is considered as the sacred fruit and used for as main fruit for “Parshad”. In this post, you will read some interesting Banana Facts.

Banana word came from the Arabic word “Banan” which means “Finger” and scientific name of banana is ‘Musa S‘ which means ‘fruit of the wise man’.

It does not grow on plants. It is grown on the world’s biggest herb. There is no any wood in the banana tree. The whole tree is made up of the tightly overlapped leaves.

Banana is bio-technically is a berry. Berries are the fruit that are grown from single seed and contains seed in it.

The raw banana can be cooked as vegetable.

First cultivated fruit by humans is none other than banana. First farm of banana is established in South Asia.

In  United States the banana was first introduced in 1870.

There are more than 1000 different types of bananas and few of them test like strawberries.

India is the biggest producer of the bananas in the world and produce 11 million tons of banana every year.

Most of the people in world peel banana upside down that is a not correct way to peel it.

The peel of the bananas are also edible and can be cooked.

Inside of the peel also can be used to polish the shoes.

Some people say that you can whiten your teeth by rubbing banana peel on teeth.

Some other people say that the inside of banana peel can also calm the mosquitoes bite irritatio.

Bananas do not have any fat and have potassium, fibre, vitamin B6, vitamin C , low calories and tryptophan that make bananas perfect food.

Tryptophan in the banana makes you feel happier because this converts into serotonin which promotes relaxation and improve mood.

Two bananas give you enough energy for 15-25 minutes workout. And it is used as a pre-workout and post-workout meal.

Banana is radioactive. But the radioactivity is very low and do not harm our bodies.

The ripening speed of banana can be controlled by humans

The ripening speed of banana can be controlled like we can speed up or slow down the ripening process of banana.

If you want to speed up the ripening speed of banana then wrap it in the brown paper bag and adding an apple in the bag boost the process and for slow down the speed, wrap the banana in the polythene bag.

Banana can ripen after plucked from tree.