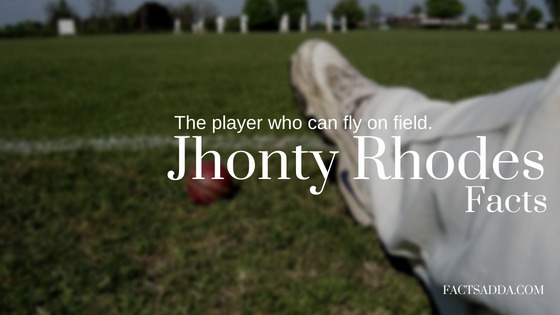 At every particular time, we see some sports legends. Today we are going to talk about one of the sports legends from the cricket world who changed the fielding part of cricket. Before him, fielding is not considered the main part of cricket. But this legend showed us that fielding is also can be a game-changer. By his fielding, he helped his national team to win most of the matches. He proved that saving 16-20 runs in fielding, has the same impact in the game as a half-century made by any player. After him, the very cricket teams also start to focus on fielding. By his fielding, he changed the whole world cricket. We are talking about the World’s best fielder, Jhonty Rhodes. He is titled as the player who can fly on the field. Let’s take a look at some cool Jhonty Rhodes facts.

In his childhood, Jonty Rhodes was a rugby 🏉 player. But he suffered from mild epilepsy in a younger age, so he has to quit rugby

Jhonty Rhodes also played Hockey for the national team of South Africa. He was a team member of the 1992 Olympics game.

In the practice season, he often delayed team bus for more catch practice.

He worked as an accountant before calling for the national team.

He is a big fan of India so he named his girl child “India Jeanne Rhodes”.