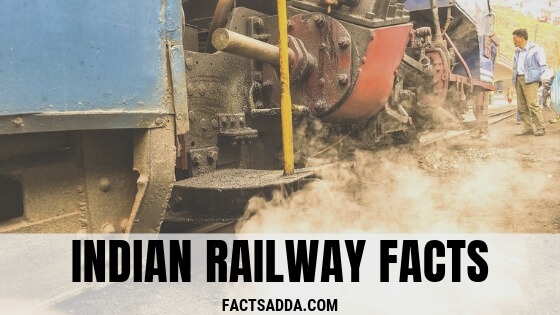 Indian Railway is the rail network of India. Indian Railway’s operating route length is more than 65,000 km and it is operated and maintained by the Ministry of Railways of India. Let’s see some facts about Indian railways.

Everyday average 30 million passengers use rails as a transport medium. It is the greater number than the population of Australia. From April 2017 to March 2018, 8.26 billion passengers and transport 1.16 billion tonnes of freight transported by Indian Railways.

India is so big that Indian Railways is divided into seventeen (17) zones for smooth operations.

Slowest train in India run at a speed of  10 kilometres per hour (6.2 miles per hour). The train is called Metupalayam Ooty Nilgiri Passenger.

Gatimaan Express (New Delhi to Agra) is the fastest train in India. The train runs at the speed of 188 kilometres per hour (116.818 miles per hour )

The record of maximum stops for an Express train is held by Howrah-Amritsar Express. it has 115 stops.

In Gorakhpur, UP (Uttar Pradesh) world’s longest railways platform is located. The length of the platform is 1.3 kilometre.

In India, train delay is very common. But Guwahati-Trivandrum Express is the most unreliable. Its average delay time is 10-12 hours in the journey.

In starting,  for 50 years there were no toilets in the trains.

First computerized reservation was started in 1986 at New Delhi.