Dangerous Dog Breeds in the World 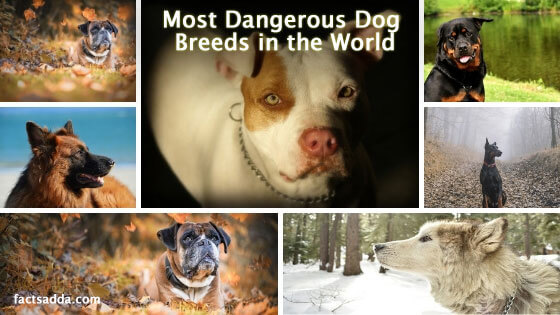 Dogs are the member of the Wolf family and are the most honest and faithful pet of the humans. Humans used to pet dogs since from last 10,000 years. That time humans used dogs for only hunting but nowadays dogs are a symbol for the richness of the families. Dogs are so faithful for their owners that they can sacrifice their lives for the owner. There is 340 different breed of dogs all over the world. And in the United States, there are 100000.00 pet dogs. Dogs are not only favourite animal of the civilians but in the army and other security agency they are famous. Let check the most Dangerous Dog Breeds in the World.

Dangerous Dog Breeds in the World

Pitbulls are the most dangerous dogs in the world. Because of their attacking nature, the are illegal or banned in some of the countries but in India, one can pet a pitbull. Americans are fond of these dog breed and most pitbulls owned by them.

German Shepherd also known as police dogs. It is one of the most dangerous dog in the world. It can bite on someone with the pressure of 108 kg. These dogs are the first choice of defence force because of their sniff power. Not only sniff power but these dogs are also have more faithful, smart and powerful.

Rottweiler are so powerful that they bite with the force of 148 kg. These dogs have angry behavior and can kill someone when it is not in good mood. In Europe and Some states of America these dogs are banned. The DNA of these dogs are 99% same as DNA of Wolfs.

These dogs are also of attacking nature but t=these loves to spent more time with their owners.

Malamute are from North America and look like a Wolfs. These dogs are very aggressor, active and intelligent.

Wolf Hybrid are the cross breed of Wolfs and Dogs.These dogs can attack on anyone that is why these dogs are banned in some states of America.

Huskys are the dangerous as well as intelligent dogs. These are also known as sled dogs. These dogs are developed in Russia and are suitable for cold region because of their fur.

Great Dane the largest physique dog in the world. These dogs nature.