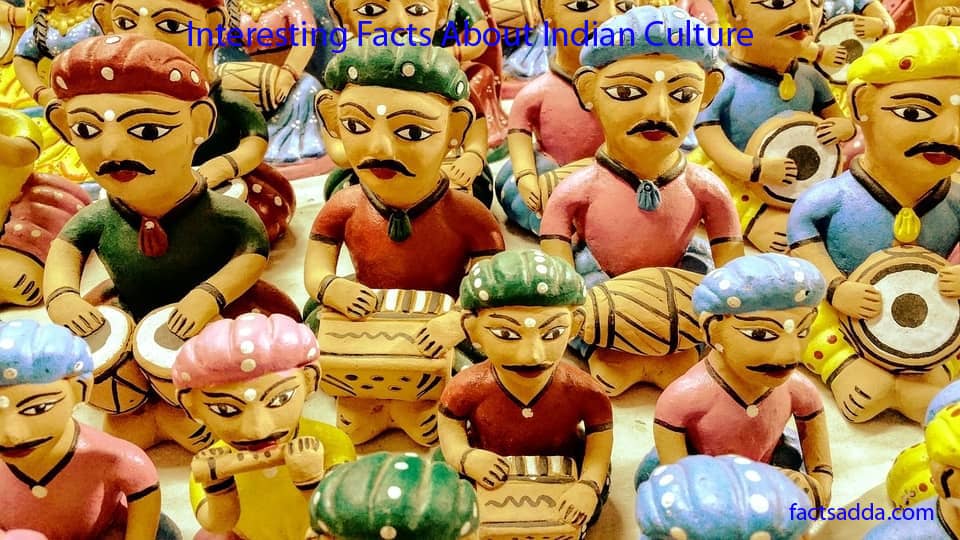 Hello friends, Welcome to Factsadda.Com In this post, we are going to tell you interesting facts about Indian culture. In which the great history of India, the unique geography, and the Indus Valley civilization was born, and it built in the Vedic era.

After that, Buddhism and the beginning of the Golden Age and along with it flourished includes its own ancient heritage. Apart from this, it also includes customs, traditions, and ideas of many neighboring countries.

The customs, languages, customs, and traditions of India for almost the last five millennia give a unique example of great varieties in its relationship to each other.

Along with Hinduism, various religious systems like Jainism, Buddhism, and Sikhism also originated and emerged in this culture, And for this reason, its various religions and traditions have influenced different parts of the world.

Indian culture has more importance in the history of the world than other civilizations. Let’s first know the characteristics of the culture.

The culture of India is one of the oldest cultures in the world.

Since the excavation of Mohenjodaro, it has been consider as the time period of civilizations like Egypt and Mesopotamia.

Apart from its ancient culture, it is also immortal.

Because along with Chinese culture, all other ancient Egypt, Iran, Greece and Rome and Mesopotamian Sumerian, Assyrian, Babylonian period cultures are over,

And only a few parts are left to sing his pride,

But Indian culture revolved in a cycle of several thousand years and is still alive.

The greatness of India attributed to its civilization.

Who taught the whole Indian continent the lesson of civilization and also civilized all the wild nations outside it. Iran and Afghanistan left their ever-lasting influence on the vast landmasses of Siberia to Sinhala (Sri Lanka) and to the islands of Madagascar Island, Bali.

Now We know the Interesting Facts about Indian culture. What is it?

Different languages ​​are spoken in all regions of India. These include Punjabi, Bengali, Telugu, Marathi, Tamil, and Urdu are some of the languages ​​spoken by the state.

The Hindi language has got the status of the official language.

The Hindi language is written in the Devanagari script. Despite the fact that many people in India communicate in Hindi, 55% of India’s residents speak a language other than Hindi. There are 715 languages ​​in use in India.

India is recognized as the third-largest Hindu religion in the world and the origin of the fourth Buddhism. Today, religion also has an important role among the people.

There are many varieties of Hinduism. About 60% of the population here is Hindu. Around 13% of Indians here are Muslim, making it one of the largest Islamic countries on earth.

Christians and Sikhs make up a small percentage of the population and followed by Buddhists and Jains.

Along with India, different varieties of food are also famous in the world. It known for high use of herbs and spices.

Most vegetarians like wheat flour, basmati rice, and gram, etc. and ginger, coriander, cardamom, turmeric, dried chili, and cinnamon are used in their diet.

For chutney, tamarind and tomatoes, and various herbs are used in Indian cooking.

In North India, padded flatbread called bhature is eaten regularly with chickpeas vegetables. Here, food plays an important role as a dessert in every day as well as festivals.

As the era changed, many foreign kings and Mughals ruled here. So he made a significant impression on Indian cuisine. And due to which many traditional Indian dishes include meat, fish.

Time is moving forward. But still, here the boy and girl only do marriages arranged by their parents or their relatives, in which the bridegroom is agreeable.

Every caste, religion, and group in India has its own special way of marriage ceremony. Seven rounds in front of Hindu fire that take seven people, And the Sikh people take turns in front of the holy light of Shri Guru Granth Sahib.

Indian people are also famous for welcoming their guests with garlands of flowers. These people also offer garlands of flowers to Goddesses and Gods during prayer, And in their marriages, there is also the ritual of exchanging garlands between the bride and groom.

Wearing jewelry has also been a tradition in Indian. Here jewelry is used as much for personal use. As much as it used to give gifts on auspicious occasions.

The culture of this place goes on from generation to generation and in this way, the importance and uniqueness of jewelry are understood.

The beauty of an Indian woman is in the dress she wears. Most of the women traditionally wear saris here. Also wears Ghagra-Choli, Salwar Kameez, Dupatta.

Along with this, Bindi is a part of women’s makeup. Women wear a scarf on the shoulder to look beautiful and perfectly fine.

The man wears kurta-pajama, dhoti, sherwani, etc. as a traditional garment. And also tie the turban on the head in the traditional way.

Turban has great importance for Indians. Over time, people also like to wear western clothes here.

Namaste or Namaskar is one way of greeting. Namaste (welcome) means that my inner light welcomes the light within you, and is derived from the Sanskrit word pranam. Which means Welcome.

The word Namaste is used at the beginning of a written or oral colloquium and while departing. The method of namaste is done by connecting the palms of both your hands in front of the chest and with the fingers facing up.

People do not need any reason to dance here. The celebrations on the streets between Durga Puja, Ganesh Chaturthi, Janmashtami, and Holi showcase the true moving abilities of Indians.

The Surajkund Craft Fair held in February every year in Haryana attracts people from far and wide. In such ceremonies, you can get to know the real India, And every person comes to these fairs to know some other society and customs.

A famous example of this is the Kailashnath temple in Ellora,

which was built by cutting very large rocks, And the sculpture of Elephanta Caves located in Maharashtra and Kashi Vishwanath and Jain Temples located at Pattadakal in Karnataka.