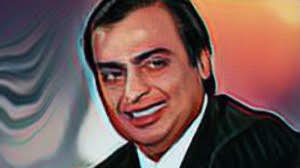 In Business world, Mukesh Ambani is the name that does not need any introduction. He is an India business tycoon. He is the chairperson, MD (Managing Director) and highest shareholder of the RIL (Reliance Industries Limited). RIL has the highest market value which makes it India’s most valuable company. We are sharing with you some amazing  Mukesh Ambani facts.

Mukesh Ambani born in Dhirubhai Ambani and Kokila Ben’s home on April 19, at Aden, Yemen. He is the elder child of Dhirubhai and Kokila Ben. Mukesh Ambani has three siblings a younger brother, Anil Ambani and two sisters Dipti Salgaoncar and Nina Kothari. He lived in Yemen for just a period of one year, because 1958 Dhirubhai decide to came back to India. In childhood, Mukesh and his siblings were more monitored by Mahendrabhai, who was their caretaker. Like a common child, Mukesh Ambani and his siblings played sports like football and hockey. They annually visit the villages and roamed the different areas of Mumbai.

Mukesh Ambani was born in Aden, Colony of Aden ( Yemen).

He is the elder child of Dhirubhai Ambani and Kokila Ben.

In 1984, Mukesh was married to Nita Ambani.He has three children, two boys and a girl. Anant, Akash and Isha.

He studied in Hill Grange High School at Peddar Road.

To help his father in business, he dropped out Stanford University.

He is India’s and Asia’s richest person.

He lives with his family in the world’s most expensive residence, Antilia.

Mumbai Indians (IPL) is owned by him. According to Forbes, he is one of the richest sports owners in the world.

World’s largest refinery belongs to him. The refinery is situated at Jamnagar Gujarat.

Mukesh Ambani has more money than the 14 states of India.

RIL industry contributes 5% of the total tax-revenue of India

Reliance fresh is the household product selling chain with more than seven hundred stores all around the country. This chain is started on October  29, 2006.

He is fond of cars and has a huge collection of cars. In his collection, there are 168 cars. He also owns a BMW 760LI, which is s completely bulletproof and its armour is so strong that it can also easily bear the bomb blast.

Worth 25 crores caravan is the part of his car collection.

Like cars, he is also fond of movies. He watches at least 3 movies in a week.

He does not follow any brand. He maintains simplicity. He mostly wears a simple shirt and black pent.

He is pure vegetarian and does not tasted a drop of alcohol till date.