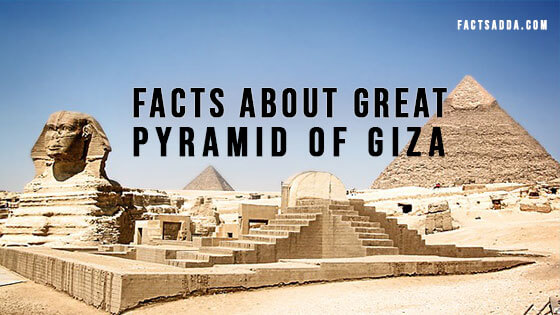 Egypt is a country of wonders and mystery. One of the biggest mysteries is that how the ancient people of Egypt built that big pyramids. The most popular pyramids from Egypt are the Pyramids of Giza. These pyramids are so big that some people say that these pyramids are built with the help of aliens. Who knows what is the truth? Leave this thing, who and how it was built check out some Great Pyramids of Giza facts.

The Great Pyramids of Giza are a built-in bank of the Nile just south of Cairo city Egypt.

These Pyramids of Giza are approx 4000 years old and it is made on the geographical center of the earth.

Pyramids of Giza were built back in between 2560 and 2540 BCE. And the position of these pyramids the same as Orion Belt.

There are three chambers in the Great Pyramid. There is a narrow tunnel created in the pyramid for the circulation of oxygen.

In the pyramid, there are many secret chambers and paths pyramid which are still unknown by the archaeologist.

2000 years ago a Roman geologist was found the North gate to enter the Pyramid.

Great Pyramid one of the Pyramids of Giza was the tallest man-made structure for more than 1,000 years with a total height of  481 feet (146 meters).

The stone blocks used to build the pyramids are 2.5 tons heavy on average. Some of the weigh 50 tons.

2.5 million stone blocks were used to build the Great Pyramid.

Inner walls of the pyramids are built with granite. They brought the granite block from 800 kilometers (500 miles).

Stone hammers and Copper chisels were used to make this huge pyramid. A kind of the poor tool.

All the blocks are used in the pyramid are irregular in size. It is still difficult for modern technology to create a structure with different size stone blocks which ancient Egyptian created a long back.

According to archaeologists it only took 20 years to build the pyramid completely. If we calculate it just took 1 minute and 30 seconds to process (Cutting, Carving, and placing ) a stone block that weighs approx 2 tons.

The Pyramid is built in the direction. That it points to 500 north which is t of the pole. Modern engineering learned this in the 17 century. But Egyptian practically used this thousand years ago

All the pyramids in the world are similar. It is strange because that time when there is no transportation facility somehow ancient people are building some kind of structure.