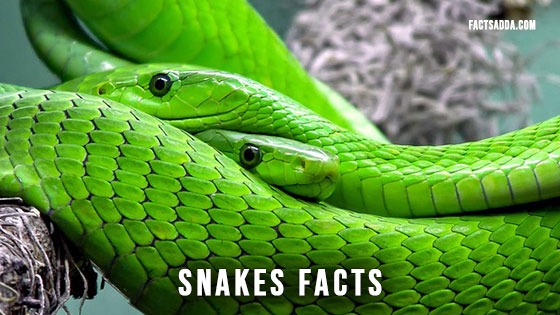 Snakes, Everyone is familiar with this name. Few peoples love snakes, but most of the people hate snakes because of the venomousness. It is good to stay away from snakes because their one bite can result in death. In this post, we will share with you some facts and snake information.

Snakes found on every continent in earth except Antarctica.

All the snakes are not venomous.

All the snakes don’t have fangs. Only venomous snakes have fangs. Fangs are sharp, long, hollow teeth that are connected to a small sac in the snake’s head behind its eyes.

Every species of snake has the various lifespan, some of them live for 5 to 10 years and some of live for 25 to 50 years.

Snakes grows for life time so they have to release their skin. Because their skin not grow.

The smallest snake of the world is only 3.9 inches (10 centimeters) long and called thread snake.

There are some species of snakes are blind. Brahminy blind snake is most common. And most people thinks it a earth worm.

Most snakes can swim perfectly. There are water snakes also which are categorised in two different category one the FreshWater snake and other is Sea Water snake.

Check out also some facts about animal and birds

Freshwater snakes belong to Acrochordidae family and sea snake are members of the Elapidae family.

Sea snake spends their most of time underwater and some of them adapted the underwater life completely and cannot move on land.

Snakes do not chew their food they directly swallow it and some time they swallow alive animals.

Some snakes can eat small egg and some of them can easily eat deers and pigs.

The thread snake eats the pupae, or eggs of ants.

Snakes like Pythons and Anacondas can eat deer and pigs.