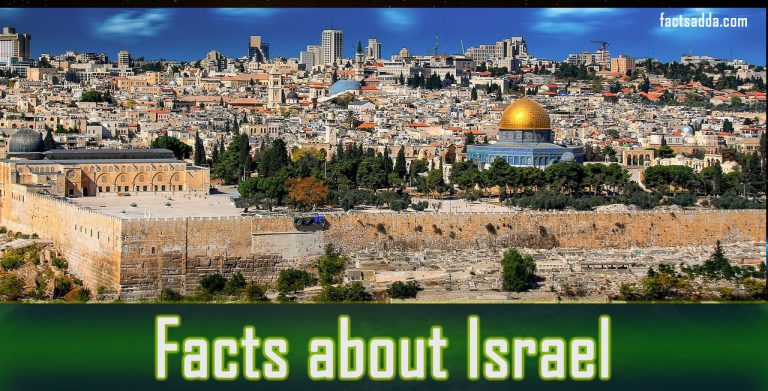 Israel is a middle east Jewish country and it is the only country in the middle east that has liberal democracy. In this article, you will read some amazing Israel facts.

Country’s official language is Hebrew. It is one of the oldest languages in the world.

There is no codified constitution in the country but it is a democratic country.

Oldest continuously used cemetery in the world is in Jerusalem.

Israel is on the list of countries that launches satellites in space.

44% of lawyer in the country are women and a huge number of women working in IDF.

Living standards of Israel is very high than any middle east country.

Israel is the number one country that recycle most of plastic waste.

Israel offered Albert Einstein the presidentship of Israel in 1952 but he declined the offer.

In Israel, it is compulsory for every young ( male, female, rich, poor, minister’s family members) to practice military training.

Underweight models are banned in Israel.

For convenience to blind, Israel notes have Braille markings on them.

In the Kargil war between India and Pakistan, Israel secretly supported India.

It is the only country in the world that is situated in the same place with the same name for the last 3000 years.

Starbuck has huge success in the world except Israel.

El Al, Israel’s national airline traveled with 1088 and set a world record of most passengers in a flight.

The oldest copper mine in the world also belongs to Israel.

Medical service in Israel is so rich that it is the home of the most cancer survival patients in the world.

It is the only country in the world wherein the 21st century the number of trees increased instead of decreasing.

Antivirus was also developed in this nation.

First epilator (Hair Remover) was designed and manufactured in Israel.

Cervical cancer vaccine was developed by the team that was by Israeli Doctor.

Given Imaging, Israeli medical technology company developed a camera that is so small it fits in a pill.

Drip irrigation to save the water was invented in the Israel.

To protect passenger and fighter aircraft from missile attack, Israel developed a system.