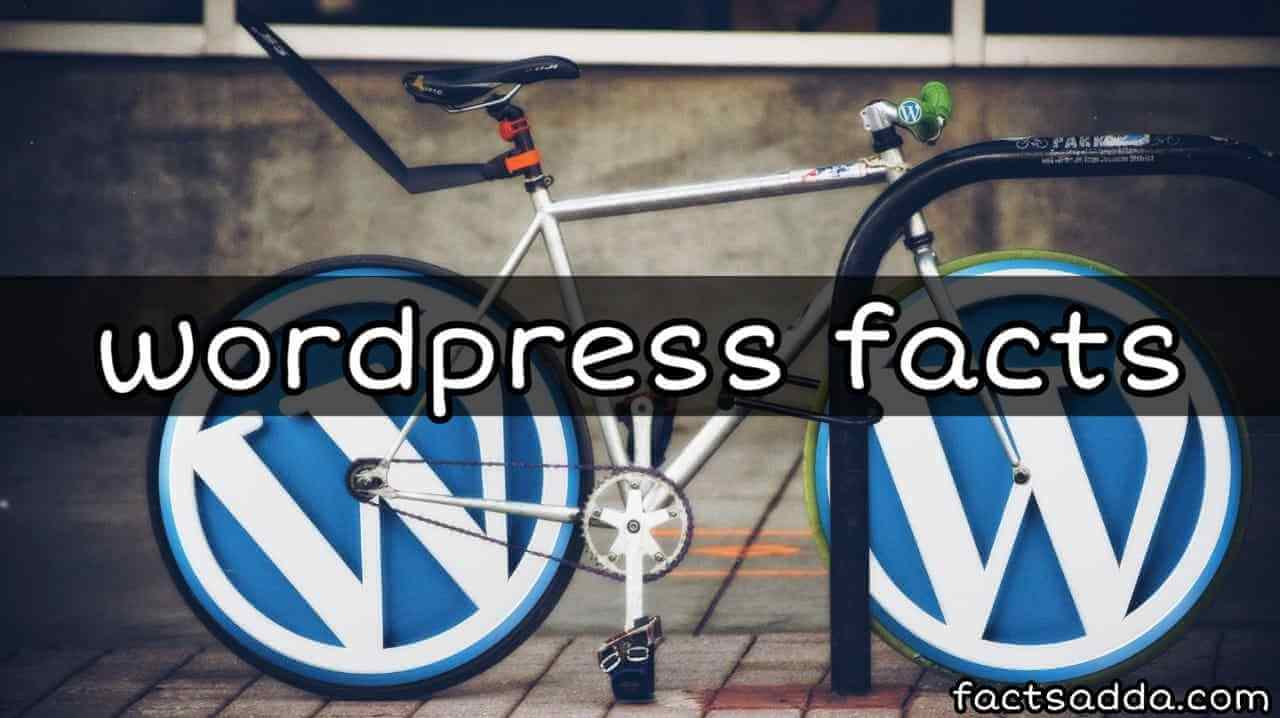 WordPress is a very popular blogging platform and it is usage is more than any other platform. Because it does not require any type of coding to create a website but It gives full authority to take only a few minutes for an attacker to run an automated device that can detect and exploit vulnerabilities. This highlights the importance of choosing the right WP web host that auto-updates both plugins and WordPress.org to manage it is site accordingly. The statistics of WP help to define this powerful Content Management System. These are its biggest interesting facts. In the post below, we will learn about WordPress statistics and facts :

1. It Was launched on 27 May 2003. This Content Management System is written in PHP language and MySQL is used for the database. Up to 20% of JavaScript is used in it.

2. This was not done by any company but was developed by Matt Mullenweg and Mike Little, who were inspired by the b2/catalog blogging platform. In 2001, French programmer Michael Valdrighi developed a blogging platform called b2/catalog that was written in PHP and distributed under the GPL license. But this platform could not run for long. Reached the brink of being orphaned in 2 years.

4. Matt Mullenweg did not keep this program to himself and opened this platform for free to programmers all over the world. He established the WordPress foundation for this work, Whose task is to operate the free version of this. Further, It is gained popularity without advertising and it also grew rapidly.

5. Joomla, Drupal, Magneto, Shopify, WooCommerce are also content management systems like this. If you talk about the best CMS, WordPress.org comes at one number.

7. Whenever you have ever heard of this or you have read it, and whenever there is a discussion about this. it is WordPress.org.

It is freely available for everyone. For this, you need a domain name and hosting. On this, you can control your website completely and can also use custom, themes, plugins, etc.

It allows you to design the theme to your liking by using custom PHP code, custom HTML, and CSS.

Talking in simple language, we get a full domain on WordPress.org. There is no limit to the size of the blog. In this, more than 1500 themes are available to use for free. Also, apply to other plugins and ads. This program is self-hosted and the content present in their blog is own. Therefore, if you want to place ads in it, you can also monetize it.

If you have chosen blogging as your career and want to give time to it by writing content. Then you can start with this. Because search engines attach more importance to it than WordPress.com.

8. WordPress.com is a managed platform. Which we know as the hosting platform. It was also made by Matt Mullenweg as a paid version. For its operation, he formed a company named automatic.Inc.

This free hosting provides too many limitations. If you make a website with a free hosting plan. So this website will be made with your wordpress.com and you will have not complete control over it.

To remove this, one has to buy a premium plan. Then you will be able to use your name. But can not be fully customized. Only you will be able to use the themes and plugins available with the paid plan. To blog on this platform one has to follow the terms of this. If the condition is not followed, then your account will be closed without any notice.

9. Its plugin helps to add features to your website. Its plugin is used for everything. You have to search the plugin according to yourself and go to your site and add it. what is a plugin and what are its statistics called?

Like we turn on the button to turn the fan. It is done in one click. Similarly, to make contact forms it is on your website, we have to install the plugin. Which makes our work easier.

If you create a contact form on Google’s Blogger, then you have to do coding, and Google’s Blogger is based on computer language and coding. Without which you can do nothing. If this is to be done in one click, then it is called the WP plugin.

Talking of the statistics of its plugin, the count is more than 55,000 and so far these plugins have been downloaded by more than 1 billion people. 18,262 new plugins have been published by WP from 2016 to 2019. 47% of plugins consist of a donate button. There is 76% of plugins are with the homepage. More than 55% of the plugins are not rated until now.

10. Usage statistics of WordPress, in which the percent of the website is empowered, with a 37.5% share in the CMS market. The world’s 14% to 15% website is based on WP and out of 10 million websites, at least 500 sites are operated by it each day. Many types of websites like news, portfolio, personal blog, and eCommerce websites have been made in it. Which is also included in Facebook news The New York Times etc.

11. WordPress community is built to help you. Where you can know the solution to your problem by asking questions. As you know what process is a very popular open-source CMS platform. For this, you have to go to its support forum.

12. Like WordPress, Its fans around the world get to learn from each other. Let’s see what stats it connects with its users. In 2006, Matt Mullenweg held the first world camp in San Francisco. So far 932 world camps have been built in 65 countries. The 2017 World Camp event in Europe set a record in which 1900 people from 79 countries participated. Users from over 400 cities around the world gather in one meetup.

13. The WordPress theme is a user-friendly framework for your blog or website. Through which the visual appearance of your website can be customized. In simple language, the entire management is done by the subject of how your site will look from the front. What are the theme statistics of its going forward?

The theme was first introduced in 2005 as the default WP theme. Its organization offers over 5800 themes for free. There are premium themes and plugins on ThemeForest. According to a report, Avada is the best selling theme of this. This theme has been purchased more than 2 million times by users from the ThemeForest site for $ 59.

14. Talking about its website statistics, more than 70% of WP installations are susceptible to hacker attacks.

Does anyone know if thousands of WP installations get hacked every year? Its users have several WP security plugins that they will use. Let’s mention WordPress security stats.

These data addressed several weaknesses such as remote code execution during research conducted on 15 September 2013, 1 day after the discharge of WordPress 3.6.1. The research was conducted by CEO Sandro Gauci and was the founding father of Competent Security.

Of the 74 different versions of WP identified, 11 are invalid and in 18 websites non-existing versions of this are still vandalized with its 2.0. Only 18.55% of the websites were upgraded to WP 3.6.1. 30.95% of internet sites are still running a weak version of WP 3.6. This means that 73.2% of the most popular WordPress installations are unsafe.

It takes only a few minutes for an attacker to run an automated device that can detect and exploit vulnerabilities. This highlights the importance of choosing the right WP web host that auto-updates both plugins and WordPress.